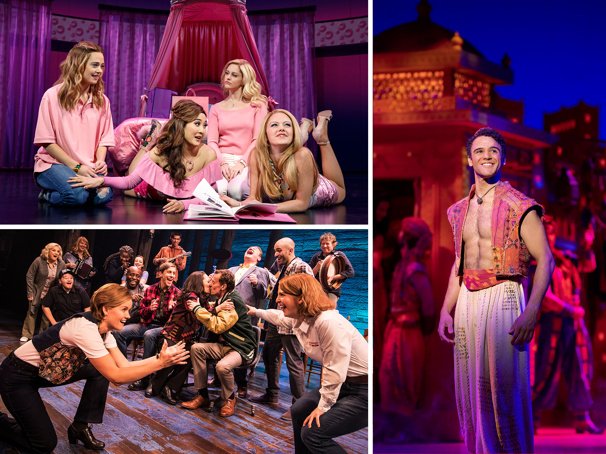 Broadway blockbusters Mean Girls, Disney’s Aladdin and Come From Away will be part of the upcoming season. The series will also include Les Miserables, Escape to Margaritaville and Bandstand.

Learn more about all of these exciting stage hits below!

LES MISERABLES
October 8 – 20
Cameron Mackintosh presents the new production of Alain Boublil and Claude-Michel Schönberg’s Tony Award-winning musical phenomenon, Les Miserables, direct from an acclaimed two-and-a-half-year return to Broadway. With its glorious new staging and dazzlingly reimagined scenery inspired by the paintings of Victor Hugo, this breathtaking new production has left both audiences and critics awestruck. Set against the backdrop of 19th-century France, Les Miserables tells an enthralling story of broken dreams and unrequited love, passion, sacrifice and redemption—a timeless testament to the survival of the human spirit. Featuring the thrilling score and beloved songs “I Dreamed A Dream,” “On My Own,” “Stars,” “Bring Him Home,” “One Day More” and many more, this epic and uplifting story has become one of the most celebrated musicals in theatrical history. Seen by more than a 130 million people in 44 countries and in 22 languages around the globe, Les Miserables is still the world’s most popular musical, breaking box office records everywhere in its 32nd year.

ESCAPE TO MARGARITAVILLE
November 19 – December 1
A change in attitude, is headed to your latitude. Welcome to Margaritaville, where people come to get away from it all—and stay to find something they never expected. Get ready for a hilarious and heartwarming musical with the most unforgettable songs from one of music’s greatest storytellers—Jimmy Buffett. USA Today calls it “A little slice of paradise!” and Entertainment Weekly raves, “It will knock your flip-flops off!” So don’t let the party start without you. More than a musical. It’s a way of life.

MEAN GIRLS
March 3 – 15, 2020
Direct from Broadway, Mean Girls is the hilarious hit musical from an award-winning creative team, including book writer Tina Fey (30 Rock), composer Jeff Richmond (Unbreakable Kimmy Schmidt), lyricist Nell Benjamin (Legally Blonde) and director Casey Nicholaw (The Book of Mormon). Cady Heron may have grown up on an African savanna, but nothing prepared her for the vicious ways of her strange new home: suburban Illinois. Soon, this naive newbie falls prey to a trio of lionized frenemies led by the charming but ruthless Regina George. But when Cady devises a plan to end Regina’s reign, she learns the hard way that you can’t cross a Queen Bee without getting stung. New York Magazine cheers, “Mean Girls delivers with immense energy, a wicked sense of humor and joyful inside-jokery.”

COME FROM AWAY
April 7 – 19, 2020
The true story of the small town that welcomed the world. Broadway’s Come From Away has won Best Musical all across North America! The New York Times Critics’ Pick takes you into the heart of the remarkable true story of 7,000 stranded passengers and the small town in Newfoundland that welcomed them. Cultures clashed and nerves ran high, but uneasiness turned into trust, music soared into the night, and gratitude grew into enduring friendships. Don’t miss this breathtaking new musical written by Tony Award nominees Irene Sankoff and David Hein, and helmed by Tony Award-winning Best Director, Christopher Ashley. Newsweek cheers, “It takes you to a place you never want to leave!” On 9/11, the world stopped. On 9/12, their stories moved us all.

BANDSTAND
May 5 – 17, 2020
From Andy Blankenbuehler, winner of the 2017 Tony Award for Best Choreography and the 2016 Tony Award for Hamilton, comes Bandstand—the new musical that explodes with the most high-octane, heart-stopping and best dancing on stage today. It’s 1945. As America’s soldiers come home to ticker-tape parades and overjoyed families, Private First Class Donny Novitski, singer and songwriter, returns to rebuild his life with only the shirt on his back and a dream in his heart. When NBC announces a national competition to find the nation’s next great musical superstars, inspiration strikes! Donny joins forces with a motley group of fellow veterans, each an astonishing musician. Together, they form a band unlike any the nation has ever seen. Along the way, they discover the power of music to face the impossible, find their voice and finally feel like they have a place to call home.

For more information about the series and the benefits of being a subscriber, click here.